Going to church in S Africa

Our pastor had recently went to S Africa and held tent meetings in Swalala about 30 mins drive outside of White River.  While there, he had the privilege of seeing 100 S Africans come to a saving knowledge of Jesus Christ.  So now the missionary family is holding church services every Sunday afternoon out in the village area.  God blessed the missionaries with a vehicle (A Venture) that can seat 11 passengers when they first arrived.

While there visiting we went to the church services they held out in the village area.  It is a beautiful drive on the way there.  Nothing like we had ever thought we'd see in Africa!

On the way there, the missionary stops to pick up anyone wanting a ride.  We were planning on picking up a couple of teens, but as the one got in the car she told us that her brother was coming to.  It was so exciting to see as not just one but several family members came running from every direction wanting a ride to church!  One of the little boys was still pulling on his shirt but didn't want the pastor to leave him so he came running on out!  We alreday had 7 people in the vehicle and they kept climbing in until we had 15 people crammed, and I do mean CRAMMED, in there!  And this is in 90+ temperatures!  What an exciting ride to church!! This is what the inside of the Venture looks like. In this picture, we're taking some church members home on a Wed night.

Once we arrived at the community center where they're holding services, we unloaded and the missionary went to pick up another group of people needing a ride.  Here is a picture of me & the missionary's wife with our daughters outside the center waiting for someone to come unlock the gate:

It was so hot that we decided to hold services outside which was interesting since we were next door to a Karaoke bar! (the picture below is of the Karaoke bar...) How exciting to see 4 visitors receive a copy of John & Romans that our church back home had helped to publish! 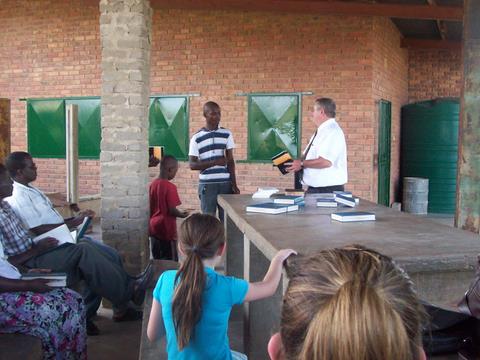 We so enjoyed worshiping the Lord with these new believers and with our friends! On this Sunday it was VERY hot....the next Sunday we were there?  It was raining & CHILLY!!

Next blog post about S Africa will be about some animals we had the opportunity to see!

Oops, you forgot something.

The words you entered did not match the given text. Please try again.